Last year, I began running the trail at Lake Storey in Galesburg, Illinois, where I live. My friend S. recommended Taylor Swift’s “All Too Well (10 Minute Version) (Taylor’s Version)” as an exercise soundtrack; Soon, I was clocking my runs by it. Five took me around the lake and to the dock where I stretched. For me, there is only the ten-minute version. The five-minute original is like getting cheated out of an orgasm.

The song had just been released on Red (Taylor’s Version), the 2021 rerecording of her fourth album, which came out in 2012. It’s a power ballad, the story of a dissolved romance that haunts the speaker, who is still hurting over the cruelties of the relationship. “You never called it what it was,” Swift sings. “All I felt was shame.” “All Too Well (10 Minute Version)”—which broke the Guinness World Record for the longest song to hit number one on Billboard‘s Hot 100—is also a master class in the present tense. By the second, third, or fifth listen of a run, all I could think about was point of view, verb tense, and one of the few “craft” words I like: temporalitywhich sounds so much more well behaved than time. Verse one opens in scene: “I walked through the door with you, the air was cold.” The door is the door to an ex-lover’s sister’s house, where Swift has forgotten a scarf. The first three lines of the verse are written in the simple past, but the fourth shifts to the present perfect, foreshadowing the showdown to come between tenses. In the ten-minute version of “All Too Well,” forty-nine lines are in the past and forty-seven are in the present.

In writing workshops, the present tense is often perceived as a lazy shortcut. As Janet Burroway notes in Writing Fiction, “the effect of the present tense, somewhat self-consciously, is to reduce distance and increase immediacy: we are there.” But are we there? And where is there? The present is a “parched and barren country,” William Gass has written. Yet he also acknowledged its existential hold: “The present can last an eternity … Its overness is never over.” When Swift ushers listeners through that door in the first line, the listener steps toward a perpetual present, a place where the overness of past love is never truly over, “’cause,” as the chorus goes, echoing Dolly Parton, “there we are again.”

One day last fall, I found a receipt from Amherst Books, dated a prior, stuck in my copy of decade The Collected Writings of Joe Brainard, along with instructions for fasting before blood work from UMass’s University Health Services. I don’t remember why I needed labs done, but I remember why I bought the book. I was in Peter Gizzi’s workshop, doing a poetry MFA at UMass. One day, Gizzi mentioned that the Library of America was publishing Joe Brainard’s collected works. I think he said what a big fucking deal this was, for the Library of America to be publishing Joe alongside Melville and Whitman: Joe—a skinny, queer, glasses-wearing art student from Tulsa.

Brainard started writing his memoir I Remember in 1969, when he was twenty-seven, while staying in Vermont, at the poet James Schuyler’s house. Every day he’d show Schuyler a page, and every day Jimmy, as Brainard called him in interviews, would say “how terrific it was, which was all I needed for the next day.” I Remember is written in a long list of mostly short paragraphs, all of them beginning with the title. In the Library of America collection, the paragraphs on the first page take up four lines, two lines, one line, one line, four, two, two, two, and two, respectively.

“I remember the first time I got a letter that said ‘After Five Days Return To’ on the envelope, and I thought that after I had kept the letter for five days I was supposed to return it to the sender.”

“I remember my father trying to get splinters out of my fingers with a needle,” writes Brainard.

“I remember daydreams of living in an old bus, or an old railroad car, and how I would fix it up.”

“I remember daydreams of having a pet monkey that would wear human clothes and we would go around together.”

“I remember daydreams of inheriting lots of money from some relative I didn’t even know I had.”

“I remember daydreams of being a big success in New York City. (Penthouse and all!”)”

“I remember Second Avenue and strawberry shortcake at ‘Ratner’s.'”

Brainard’s writing is akin to the visual art he made: friendly and image-drenched and nonchalantly funny, kind of telescopic in a diaristic way that’s relentlessly present in its anaphora, and also sometimes sort of sexy. I find myself thinking about Joe Brainard whenever I listen to “All Too Well.” Swift sings the word remember eighteen times. And then there’s the third verse, which begins by conjuring her ex-lover in a childhood photograph, a seemingly ordinary boy with glasses.

Over the last three years, my friend S. has become a devoted Swiftie. I try to impress her, and recently that’s meant intensely feeling her intense feelings for Taylor Swift. It’s not hard. I had my own Swift phase, when I was twenty-four and working at a call center, capsized by a crush, and blasting “Love Story” whenever I got off of work.

It’s because of S. that I know that the scarf Swift leaves at “your sister’s house” is the navy-and-maroon-striped Gucci scarf she was photographed wearing during her 2010 relationship with Gyllenhaal. I also know many of the names associated with the extended Swift universe: Aaron Dessner, Jack Antonoff, Liz Rose. I know the rumors about her relationship with Karlie Kloss. I know about Long Pond Studio, where Swift, Dessner, and Antonoff met to play the entirety of Swift’s eighth album, Folklor, for a Disney+ documentary. After watching clips of that documentary with S., and after watching another Swift documentary, Miss AmericanaI visit the website of the Long Pond Studio’s architect and stare at a photo of the empty building, a bank of windows glowing gold.

Something else I know from S.: Order a latte Taylor-style at Starbucks and you’ll get a nonfat caramel latte. If you’re lucky, the white sticker on your cup will say “Taylor Latte.”

I haven’t watched Taylor Swift: Reputation Stadium Tour, even though S. told me to last year, but I often remember something Swift says in a clip from it, about “All Too Well.” Swift describes the song as having “two lives” in her mind, one rooted in her own catharsis and one generated through its sharing and performance—the way the lyrics are transcribed in fans’ diaries and tattooed on their skin. She says to her audience: “You turned this song into a collage of memories.” 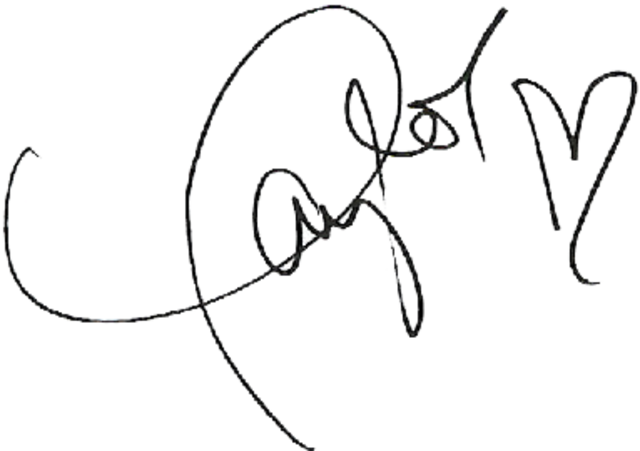 “I remember ‘Silly Putty’ in a plastic egg.”

“I remember silent moments in church when my stomach would decide to growl.”

“I remember daydreams of living in the past and having the advantage (and sometimes the disadvantage) of knowing what was going to happen before it happened.”

“The tense of memory is the present,” the Conceptual artist Carl Andre once said. Only sometimes, very rarely, maybe just once or perhaps not more than five times, Brainard’s memories refuse to be memories, by which I mean, they refuse the past tense and enter into a kind of eternal present:

“I remember smiling at bad news. (I still do sometimes.) I can’t help it. It just comes.”

“I remember balloon sleeves. And no sleeves.”

In 2014, researchers at Universidad Autónoma de Madrid conducted an experiment examining the implications of verb tense on “construal”—or how people mentally represent action and events. In the experiment, fifty students were asked to consider scenarios written in both the simple past and simple present tense. Some they ranked on their probability, eg, “John participates/participated in a cross country car race. How likely is it that he meets a friend from his city?” and others they scored on their familiarity, eg, “Sara tastes/tasted a new light food brand. How familiar does a person like Sara seem to you?”

Participants scored the past-tense statements as having less predictable outcomes than the present-tense statements. Past tense rendered the scenarios “less vivid…more difficult to imagine…reducing the likelihood assessments and increasing psychological distance.” Simple past, according to the researchers, “induced an abstract mindset.”

A second experiment, in which sixty-three college students were asked to write about an episode of excessive drinking, saw similar results. One group was told to write using only simple past-tense verbs, and the other told to write in the simple present. Those writing in past tense used more abstract language, while those writing in simple present “used more concrete linguistic terms.” (The Linguistic Category Model organizes language on a spectrum from the most abstract category—adjectives—to the most concrete: descriptive action verbs “with a clear beginning and end and with a physically invariant feature.”

The researchers sum up their findings with a note about the persuasiveness of the present tense, especially in conveying “emotional messages.” Reading the simple present, they conclude, “the audience focuses on specific details, blurring the general message but attributing high likelihood to the event and perceiving the target as familiar.” They go on, “the simple present tense . . . can increase the emotional reaction,” making “the event appear closer and more vivid.” In the bridge, where Swift’s voice hits an anguished peak, she describes how “you call me up again just to break me like a promise.” Then we’re back in the present, and, she sings, “I’m a crumpled-up piece of paper lying here.”

It was the easiest writing prompt in the world, Gizzi said, and the most replicated. My first semester teaching college writing, I brought my Library of America edition into class, read a few pages, and gave my students and myself fifteen minutes to write. We went around the classroom, each reading aloud one item in our list of “I remembers.” We remembered a lot.

“A List of Topics for Writing Practice,” in Natalie Goldberg’s Writing Down the Bonesnods to Brainard without naming him:

Begin with “I remember.” Write lots of small memories. If you fall into one large memory, write that. Just keep going. Don’t be concerned if the memory happened five seconds ago or five years ago. Everything that isn’t this moment is memory coming alive again as you write it. If you get stuck, just repeat the phrase “I remember” again and keep going.

It bothered me that Goldberg left Brainard’s name out, until I stumbled on it on the copyright page. He’s credited for the cover art of the first edition of Goldberg’s book: a fountain pen aimed at a tilted bottle of ink, spilling a pool of black scattered with stars and a moon. 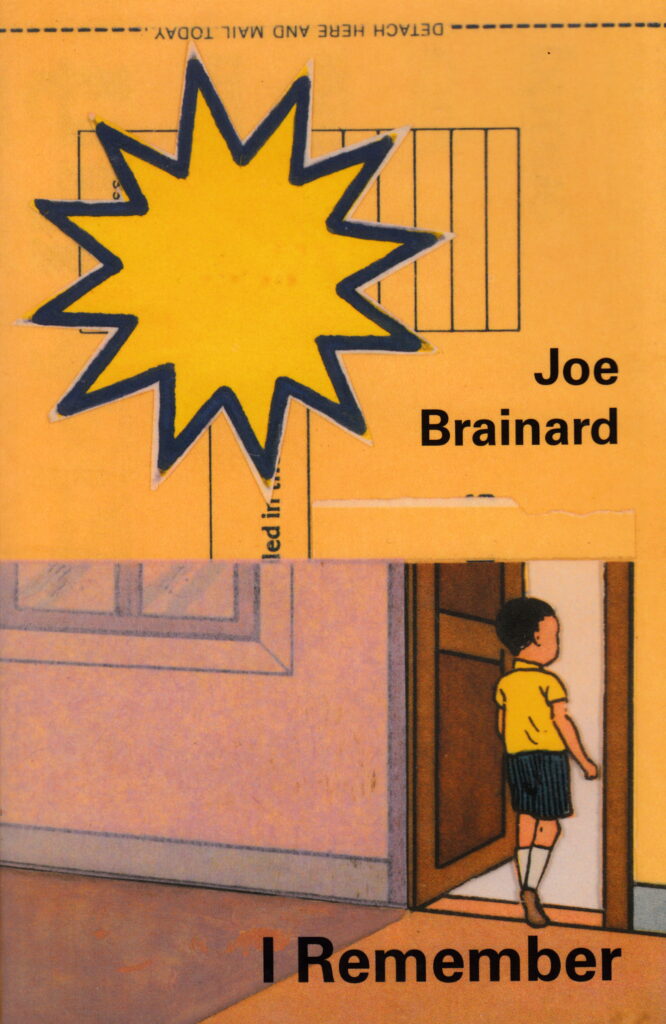 2001 edition of “I Remember.” Used by permission of the Estate of Joe Brainard and courtesy of Tibor de Nagy Gallery, New York.

JoAnna Novak’s Contradiction Days: An Artist on the Verge of Motherhood, will be published in 2023.