Lately, when I’m asked how I balance novel-writing with the other stuff in my life (the parenting, the activism, the general admin of existence), I say to break everything down into small chunks of time and ring-fence that time. Make sure you’re giving yourself that little chunk of writing time each day, instead of scrolling through social media or watching Netflix. Even if it’s as little as thirty minutes a day, that’s enough to draft a short story or a few chapters of a novel after a month. All those chunks of time add up.

One Hour a Day

For me, my standard unit of writing time is one hour a day. My latest novel Complicit is 464 pages long, and if I had considered writing anything that length at the start of the project, I would have run for the hills. But the novel developed organically, simply by giving myself the time and the space to dream up a premise and a set of characters.

For that one hour a day, I disable my WiFi, hide my phone, and focus on nothing else but those characters and the particular scene I’m writing. At the end of that hour, my novel will have grown a little bit longer and deeper, its roots reaching down further to ground it. I also make sure not to over-do the writing time each day, because the mind needs time away from the novel to relax, to ‘fill the well’ with enough art and life, so that the next morning, I’m recharged and ready to write for another solid hour. But for me, that daily practice of writing is key. Because my mind has to be revisiting the story and the characters regularly, to keep the momentum going and the plot and characters ripening.

Breaking Down a Re-Write

But once I’ve got that first draft, the same principle applies: make sure you’re working on the re-write for a manageable length of time every day. Re-drafting a 100,000-word novel can also seem like an overwhelming venture, but again, break it into manageable chunks.

I usually start a re-write by compiling a list of everything I don’t like about the current draft and what areas need fixing. These can be vague and general (strengthen the theme of x in the second half) or very specific (mention character y in the dialogue in Chapter 7). Then I categorise the To-Do List into big, medium, and small tasks. A big one might take a few days of work to wrestle through, a small one might take just a few minutes. So each day, when I sit down to my re-write, I choose which task I feel like tackling – and this depends entirely on my mood, how much time I have, how creative or ambitious I’m feeling. If I don’t have much time or headspace, I’ll take care of a small task or two. At least that way, I can still cross something off my To-Do List!

Another thing that helps is when I’ve compiled my To-Do List (but before I’ve started it), I imagine how much time each individual task will take (20 minutes or 5 hours, for example), and total those estimates up for the entire list. That way, I can estimate: ‘Ok, I need forty-five hours of work to complete this re-write.’ And then I look at my calendar, and pencil in 10 hours of work this week, 12 hours for the next week, etc. These time estimates are always just a rough guide (and inevitably, things always end up taking longer than expected). But they do help psychologically to make a re-write seem more manageable.

Setting Deadlines but Being Patient

It’s also helpful to think about time not just in one-hour chunks, but also in the longer sense. I am very deadline oriented, and it’s difficult for me to get anything done if I don’t have a deadline, even an artificially-imposed one. So I’ll say ‘let’s aim to finish this re-write by mid-April’ – and that at least gives me something to work towards.

But I also have to be patient with myself. Because crafting a book takes time. Being impatient never helps the creative process. I was desperate, for example, to finish the manuscript of Complicit and submit it to publishers before giving birth to my son in late 2019. Yet when I sent it to my agent, eight months along in my pregnancy, I was told the manuscript still needed work. I cried on the phone, because I just wanted the manuscript ‘out of the way’ before the baby arrived.

However, a manuscript is never something you should want ‘out of the way.’ You need to love the creative process, and enjoy the challenge of shaping the language, the characters, the plot into something better with each re-write.

Re-Writing a Book in Lockdown with a Newborn

Stressed about the impending birth, I decided to put the book ‘on ice’ for half a year. When I finally returned to thinking about it in spring 2020, I had a new perspective. In the bleary days of nursing a newborn, I’d read a few more books that gave me new insights into Complicit‘s subject matter. I was also now a mother, at the beck and call of a young baby, and realised I had to become more ruthless about finding writing time and headspace, if I was ever going to finish this novel.

As I’ve described in my recent chat on the TLC Being a Writer podcast, I made sure to carve out one hour a day to work on the re-write. Since we were in lockdown, this was actually possible: I could hand the baby to my partner and disappear into my room for one hour! Eventually, I was able to increase this to two hours a day. And after four months of working in this way, I had finally completed the fourth draft of Complicit. That was the version of the manuscript which ultimately sold in a pre-empt to Orion Books within 48 hours, resulting in a six-figure, two-book deal. So all that time I put in, added together in one-hour chunks, finally paid off.

Now, two years after that lockdown re-write, Complicit is finally out in the world. It’s been getting wonderful reviews from places like The Observer, The Timesand Style. I recently had a radio interview with Mariella Frostrup about it. And I’ve been having rich conversations about it at literary festivals and bookshop events.

So now I have a different attitude to my time: enjoy it. Because after four years and countless hours of working on this novel, I think I deserve to enjoy this moment as an author. 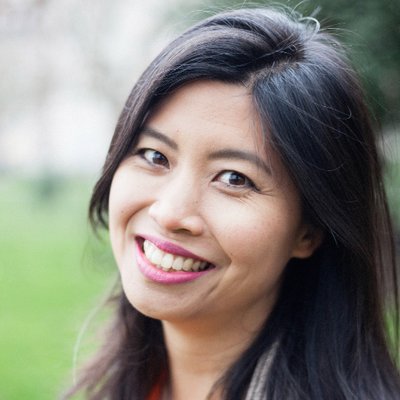 Winnie M Li is an author and activist. Complicit is her second novel, which draws from her earlier career in the film industry. A Harvard graduate, she previously wrote for travel guide books, produced independent feature films, and programmed for film festivals. Her debut Dark Chapter won The Guardian’s Not The Booker Prize, was nominated for an Edgar Award, and translated into ten languages. She is currently adapting it for the screen. Driven by her own experience of rape, she founded Clear Lines, the UK’s first festival addressing sexual assault and consent through the arts and discussion, and began her PhD research at the London School of Economics. She holds an honorary doctorate of law from the National University of Ireland in recognition of her work. Winnie lives somewhere in traveling distance of London, with her partner and toddler.